The Black Hills of South Dakota are not known for epic skiing adventures but for those willing to strap on a pair of skates and explore the unmapped canyon streams that criss-cross the forest, an epic adventure awaits.

Canyon Skating's Producer Charles Michael Ray answered some questions for PBS about his love for canyon skating and the effects of climate change on his favorite pasttime. 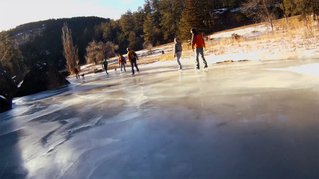 What goes into filming canyon skating and getting the variety of action shots that you did?

Charles Michael Ray: Several years of work. It's quite rare when the ice is good enough to skate. It's also quite rare when I happen to have a day off at the same time. I did not skate at all in 2017 because we had no decent ice. On the days when the ice was right I'd gather resources and call many friends to try and get out for a good skate. Often we will check various creeks and canyons to see what one might have the most potential.

Technology changed over the years that I shot this. When I started, in about 2003 there were no GoPros and no HD recording and no decent image stabilization. I could not afford fancy equipment on a small time public radio reporter's budget. At first I was shooting on a MiniDV Sony camcorder. Each year I'd try and get a little more footage and improve my shots and get a better camera. Eventually, I talked SDPB TV into letting me use one of their large TV cameras. That along with my own GoPro footage became the bulk of what ended up in the final piece.

There is a lot of tape on the cutting room floor. As for the variety of action shots, I wish I could have had more! I think more drone images would help this piece. I kept looking for the right waterfall to skate, but they are hard to find frozen properly. I skated some huge ones as a kid; I still dream of finding one again. At some point you have to let a production go and put together what you have. The ice does make for a smooth medium for handheld shooting moving images. On ice skates with a decent camera you can convey the feeling of flying along smoothly without a lot of fancy stabilization equipment. I enjoyed sharing that feeling of flying over ice with the audience. It's one of the best parts of this crazy little hobby. I also could not have done this without many friends. Creek skating is not something to do alone. Thanks to advice from friends, I often carry a rope in a throw bag used commonly for whitewater kayaking. It's a slight bit of safety. The credits to [this submitted] version were cut off; many skaters who helped with this were thanked in the original piece.