Upon her 18th birthday Anna receives the key to a mysterious lockbox from an unbeknownst source. When she opens the box, she unleashes a haunting secret from beyond the grave that unlocks the truth about her own tragic, yet truly romantic past.

John Woodruff has worked on the development of several features, countless music videos, and is currently deep in post-production with his first feature film, "Animal Among Us," written by Jonathan Murphy. A throwback in homage to the classic thrillers with a modern twist sure to stand as a point of evolution within the genre, the film stars Christian Oliver ("The Good German," "Speed Racer") and Larisa Oleynik ("10 Things I Hate About You").

Jessi Howard moved to LA after graduating from Miami University in Oxford, Ohio. She was a producer on the short film "Three Days," starring Charlie McDermott ("The Middle") and Haley Ramm ("Chasing Life"). Jessi now works in production finance for scripted series programming.

Originally from Chillicothe, Ohio, Brandy Zapata has always had her eye on LA. She graduated from Wright State University, worked as an on-air host at the CW/WDTN in Dayton, Ohio and since then has worked in LA on numerous commercials, short films, industrials and voice over.

PBS spoke with Director, Writer and Producer John Woodruff about the origin of Lockbox and what went into capturing the suspenseful atmosphere of his film. 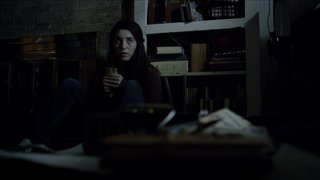 Read the Full Q&APBS: How did the story for this project form?

John Woodruff: The original story/concept was written by Cody Willoughby, a friend of Brandy’s, the producer and lead actress in the film. She then introduced it to me as a potential project for her and I to collaborate on. We are both always looking for opportunities to practice and both really liked the concept, but I was deep in pre-production on my first feature and we knew that if we didn’t shoot before I went into production on that, we wouldn’t be able to do Lockbox for months.

Cody’s draft was pretty long for a short film, about 12 pages, which equates to more prep time, more shoot time, a longer post schedule, not to mention more money, so I knew that if we were going to do it sooner rather than later, I had to tighten it up. I also felt that leaving a degree of the “unknown” in this story and just “dropping the audience into the action” was fitting not only because it positions the viewer in the same place as Anna, the protagonist, from an intellectual and emotional perspective, but is very true to life. Often it is these “unknowns” that we encounter that not only induce a significant amount of the fear based thought we experience over the course of our lives, but can also reveal the bittersweet nature of life itself.

I have found that the most effective forms of both horror and romanticism often have a large degree of the unknown in them and as such, believe effective horror to be an inversion of romanticism. I really wanted to try to create a nice blend of horror and romanticism in Lockbox and felt that leaving a lot of unknowns helped us in achieving that. I tried to leave the audience with just enough to put it together, but just enough of the unknown to maintain the mystery.

The Federal Communications Commission assigned an educational television channel to Texas Technological College in 1958. The station began broadcast operations in October 1962. On Jan. 15, 2012, KTXT-TV, Channel 5 changed its call letters to KTTZ-TV. From its tower located on the Texas Tech university campus, the station broadcasts 24/7 with its digital signal reaching 13 counties surrounding Lubbock. With cable and satellite the signal extends to additional 7 counties, the station’s coverage area is currently accessible to approximately 161,450 households and 401,000 potential viewers. With the station’s focus on arts, education, community outreach and quality programming for both children and adults it is a vital part of the Lubbock and South Plains area.