Born in Damascus and now living in Minnesota, Osama Esid’s photographs express the power of human connection. Esid, a portrait photographer, felt compelled to travel to the Syrian refugee camps in Turkey. Determined to portray his subjects with sensitivity, compassion and his own unique understanding, Esid’s images explore his personal identity and the communities he is a part of.

Kate McDonald is a multimedia producer based in the Twin Cities. Her work has been featured on PBS NewsHour, Entertainment Weekly, and National Public Radio. At Twin Cities PBS, she works for the award-winning art series MN Original. Outside of TPT, she recently produced the feature length film, “The Seeker," written by the band Cloud Cult and starring Josh Radnor ("How I Met Your Mother"). She’s the proud recipient of five regional Emmy Awards.

Brennan Vance is a Minneapolis-based filmmaker and 2017 McKnight Media Arts Fellow. Vance’s feature directorial debut The Missing Sun received a Jerome Foundation fellowship, was selected for the 2016 IFP Filmmaker Narrative Labs, and premiered at the Wisconsin Film Festival and Ashland Independent Film Festival, where it was awarded a special jury prize. Vance’s cinematography credits include “Memories of a Penitent Heart” (Tribeca ‘16) and “Robert Klein Still Can’t Stop His Leg” (SXSW ‘16). His work has earned him three regional Emmy Awards.

Director and Producer Kate McDonald and Director of Photography and Editor Brennan Vance spoke with PBS about discovering Osama for this project and his dedication and passion for his unique form of photography. 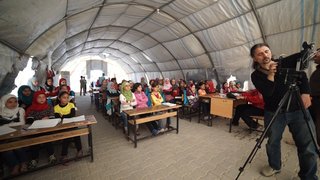 Read the Full Q&APBS: During this profile, Osama knocks on a stranger’s door requesting to photograph them. From what you witnessed, how receptive were his subjects to this and how did he generally go about choosing who to photograph?

Kate McDonald: Osama uses his camera to start conversations with people all over the world. We were struck by how effortless it is for him to connect with strangers by simply walking up to them and showing them how his old camera works.

Imperative to Osama’s process is finding a connection between himself and his subjects. In the case of Dick, the resident shown in the video, this connection was easy. The two of them hit it off right away since they shared a passion for motorcycles and an interest in fixing up old equipment. When we left they were talking about plans to meet up again, and for Osama to show Dick his studio. It was clear that more then a photograph had been made in the time they spent together.

Twin Cities PBS (TPT) is one of the nation’s leading public media organizations. Through the power of broadcast, digital, and local and national engagement, TPT advances education, culture, and citizenship to enrich lives and strengthen communities. TPT has been recognized for innovation and creativity throughout its 60-year history, receiving numerous Peabody, and national and regional Emmy awards. Based in St. Paul, MN, TPT is one of the highest-rated PBS stations in the country, reaching more than 1.3 million households each month through multiple broadcast and digital services. TPT’s areas of focus include: unleashing children’s love of learning; advancing STEM education; engaging first-stage adults; connecting communities to arts, culture and history; and serving the needs of America's aging population. MN Original is TPT’s arts and cultural series starring local artists. The state-funded series is available through World Channel on 195 public television stations in 37 states.