Douglas, an African-American youth living in Norfolk, Virginia, in 1915 attemptsto see the film "The Birth of a Nation" at a "white only" cinema that refuses to let him in. Outside are protesters and a Chinese couple that don't quite fit into either side of the racial divide. When Douglas finds a way inside, wonder dissipates into disillusionment as he is confronted with racism on the silver screen.

David Mallin is a cinematographer, filmmaker, and the Director of Old Dominion University's Film Program. He has a MFA in Cinematography from AFI in Los Angeles. David was the Writer/Cinematographer/Producer of Our Nation (partially funded by ODU's first grant from NEA) and has been the Producer & Cinematographer for a number of other ODU Departmental Film Productions.

Writer, Cinematographer, and Co-Producer David Mallin spoke with PBS about race in Our Nation, and how the film ends with a message of inclusiveness. 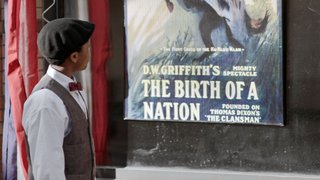 Read the Full Q&APBS: There’s a Chinese couple in line at the Lee Theatre, a whites-only theater, behind Douglas that’s also turned away from the screening of “The Birth of a Nation.” What was the purpose of placing them there, as opposed to keeping the usher interaction to the main character?

David Mallin: Racism in the US is often distilled into a Black / White issue, especially looking at history, but there are actually a lot of other ways in which it played out. The Chinese couple clearly have money.  They even feel comforted and protected by the exclusion of African-Americans from the Theatre, until they find themselves caught up in the exclusion.

Yin (the woman) even says she wouldn’t feel comfortable sitting in a dark theatre with African-Americans, however at the end of the film she is seen comfortably doing just that.  So in a way, the Chinese couple’s character arcs are one of the most important elements of the story, in that their perspective evolves over the course of the film.

Since its founding in 1961 to support education, community-supported WHRO has employed creativity and technology to serve the residents of southeast Virginia in its mission to educate, inform and entertain viewers and listeners of WHRO’s four public television and eight public radio stations. Owned by 19 southeastern Virginia school divisions, WHRO also delivers online educational and new media services to 286,000 students and 25,000 educators per month.