Our Voices Are Rarely Heard

With rare access inside Pelican Bay State Prison, filmmaker Cali Bondad and reporter Gabrielle Canon captured a day-in-the-life inside one of the most notorious supermax prisons in the US. The film shows a cinematic glimpse of the personal anguish and monotony described by inmates living in long-term isolation.

Cali Bondad is a Bay Area based director and editor. Her professional background is based in commercial work. Independently, she directs passion projects and indie films that range from experimental, narrative, and documentary. With a background in editing and photography, she yields an amazing sense of framing and rhythm in her directing. Her style is influenced by the likes of street photography and surrealism.

Gabrielle Canon is an investigative reporter and filmmaker who has spent her career highlighting important issues through narrative storytelling in video and print. Her work has appeared in several publications including Mother Jones, VICE, and Huffington Post. Based in the Bay Area, she currently writes for The East Bay Express, produces video segments for UPROXX Reports, and is continuing to uncover and tell the stories from within the criminal justice system in the United States.

PBS spoke with Director/Editor Gabrielle Canon and Reporter/Producer Cali Bondad about the artistic decisions and subjects in their short documentary on solitary confinement, Our Voices Are Rarely Heard. 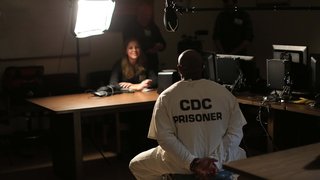 Read the Full Q&APBS: During the majority of the film, the narration from the inmates is used over video of the prison and scenes of the world beyond it. What was the intention behind this artistic direction?

Gabrielle Canon: Pelican Bay State Prison is located in a beautiful area on the California Coast, but there is a stark contrast between what inmates can see and experience and what exists beyond the confines of their cells. We wanted to visually emphasize that contrast, to show just how small the lives of inmates in solitary confinement become. Most are limited to an 8x10 cell without windows or access to the outdoors. This is one aspect of the extreme monotony and isolation some were subject to for years or decades.

Cali Bondad: When filming in and around Pelican Bay State Prison, we witnessed a profound juxtaposition of the natural beauty that surrounded the cold and harsh prison grounds. You have a super-max prison that is carved into the center of an untouched redwood forest that sits beside a gorgeous stretch of Pacific coast. The rude contrast of the solitary housing units within this breathtaking environment – without as much as a single window – seemed especially cruel and ironic. The fact that you have inmates living in solitary captivity for decades without seeing a single tree or bird is enough to give any person pause. In the edit, we wanted to show this philosophical conflict in a visceral and impactful way. We wanted to prompt the average viewer to investigate and question if this is truly humane.

POV (a cinema term for "point of view") is television's longest-running showcase for independent non-fiction films. POV premieres 14-16 of the best, boldest and most innovative programs every year on PBS. Since 1988, POV has presented over 400 films to public television audiences across the country. POV films are known for their intimacy, their unforgettable storytelling and their timeliness, putting a human face on contemporary social issues.