SunGhosts was formed in 2013 when the four members met in college. Nik Olas, Arminio “Crocodile Deathspin” Rivero, Jared Steingold and Luis “Louie” Estopiñan all had two things in common: Miami roots and an intense passion for music. Seeing them together, you’d think they grew up in the same playpen.

True Tale Productions was created by Michael Lowney and Vanessa Perez and is based out of Miami, FL. They have been working together since 2011 and have produced various film and commercial works. Their last film "White Meat" has been well received and was the 2014 Miami Cinemaslam Champion at the Miami International Film Festival. They are currently shopping around a horror anthology web series titled “The Unheard Of” and developing a feature screenplay. 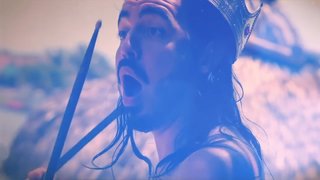 Read the Full Q&APBS: How did you come across SunGhosts and what was it about them that led to the creation of this profile?

Michael Lowney: The lead singer Nik and I worked together at Apple where we became friends. When I left Apple, I continued to follow him on social media, so I was always aware of the projects he was involved in. When I noticed he put some songs on SoundCloud with his new band SunGhosts, I gave it a listen, and ended up really liking it.

Fast forward to when it came time to find an artist we wanted to showcase on Art Loft, it was a no-brainer who we wanted to feature. We just love their sound. Their album is so eclectic. Anyone can find a song that they enjoy from them. Before the profile, we never saw them live, so when it came time to getting B-Roll, we were just blown away. The energy was amazing. That whole week of filming them, we just listened to their album on repeat.

South Florida PBS,Florida’s largest public media company, includes public broadcasting stations WPBT2 and WXEL, serving approximately 6.3 million viewers of all ages and cultural backgrounds from Key West to the Sebastian Inlet and from the Atlantic Ocean west to Lake Okeechobee. We are dedicated to bring our audiences a more textured and thorough understanding of our world, our community and the communities around them through the knowledge they need to make informed decisions; convene community dialogue; bring the arts to everyone; and engage audiences to share their stories. We are trusted by parents, grandparents, care-givers, and teachers and provide educational content that promotes the healthy development of our children. We celebrate diversity, embrace innovation, value lifelong learning and partner with those who share our passion for public service.